With some NFL sets, the thought behind it might not be immediately clear based on the name, but that’s not the case for 2017 Panini Plates & Patches Football. Naturally centered on premium memorabilia cards and printing plates, each box totals five cards with one autograph, relic and plate.

Split into three subsets, the main part of the 2017 Panini Plates & Patches Football checklist includes current players in the base, top 2017 rookie names, and a Legends grouping for retired stars. One of these cards comes in every box as does a parallel limited to 50 copies or less. 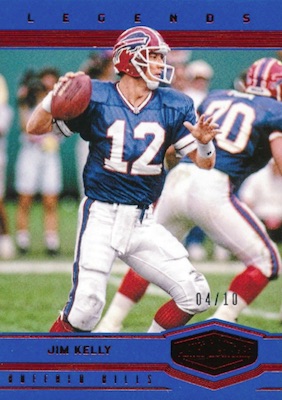 Of course, each hobby box also promises a Printing Plate, which normally comes from a variety of other sets. Autographed Printing Plate cards are a case hit.

With only five total cards per box, the 2017 Panini Plates & Patches Football hits are even more important. Signed cards can be from the Rookie Patch Autograph line, now with a larger memorabilia area, or the Plates & Patches Autograph set, which has two prime relics on each card and a print run of 25 or less. The RPA cards also have a one-of-one Shield parallel. 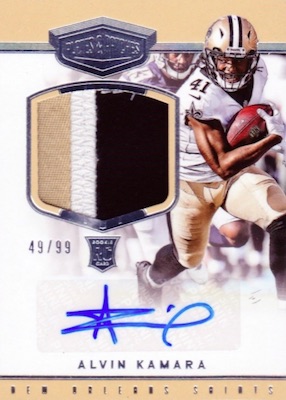 In addition, the hard-signed Canton Calligraphy and Marquee Marks (#/50 or less) provide some of the biggest NFL names.

As far as the “Patches” part of the name, 2017 Panini Plates & Patches Football includes the jumbo Full Coverage relics for top rookies. These also come in Red parallels, numbered to five copies, that feature a brand logo or laundry tag, or as a one-of-one Gold shield. Double Coverage keeps the large patch but increases the fun with two young hobby standouts. 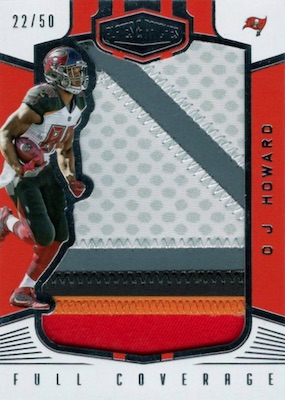 One each of the following: